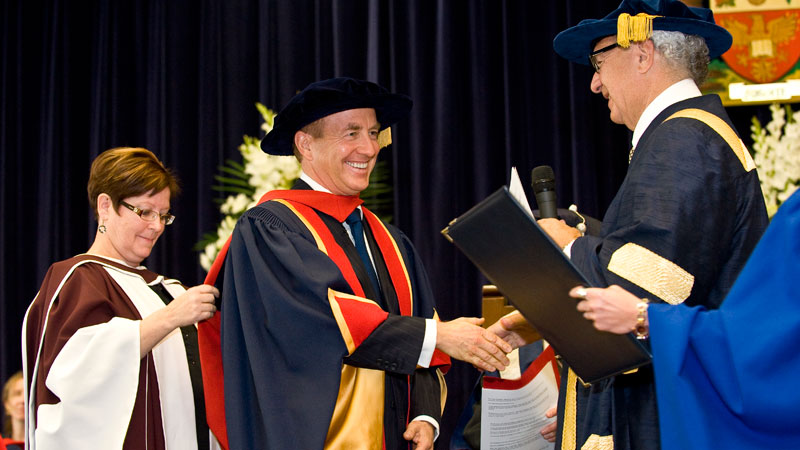 As you’re moving through life, don’t be afraid of failure. It may seem scary, but it’s one of the best ways to learn.

That was the message John McCall MacBain gave to graduates at Fall Convocation on Saturday, Oct. 19. McCall MacBain, an entrepreneur and philanthropist who received an honorary degree at Convocation, said he attributes much of his success to what he’s learned from his failures. “Failure is part of life. It is not failure itself that will determine your future; it is how you learn from your failure. Facing suffering directly and living with the discomfort — as opposed to distracting yourself from such feelings — is how you learn to build on your failures. Avoiding hardship today is a sure invitation to crisis in the future.”

McCall MacBain is the former president and CEO Trader Classified Media, the company behind publications such as the Auto Trader and Buy and Sell. Since the McCall MacBain Foundation was formed in 2007, it has made tens of millions of dollars in grants to fund projects related to health, education and the environment. Pamoja Capital SA is the foundation’s investment arm.

More than 800 students received degrees at two ceremonies on Saturday. Governor-General’s Silver Medals were presented to Donna Pearce of Niagara-on-the-Lake (Bachelor of Arts in Applied Linguistics) and Charlotte Tunikaitis of Fonthill (Bachelor of Accounting).

Board of Trustees Spirit of Brock Medals were presented to Rohan Kothari of Mississauga (Bachelor of Science in Biological Sciences) and Lindsay Cline of Ancaster (Master of Arts, Applied Health Sciences).