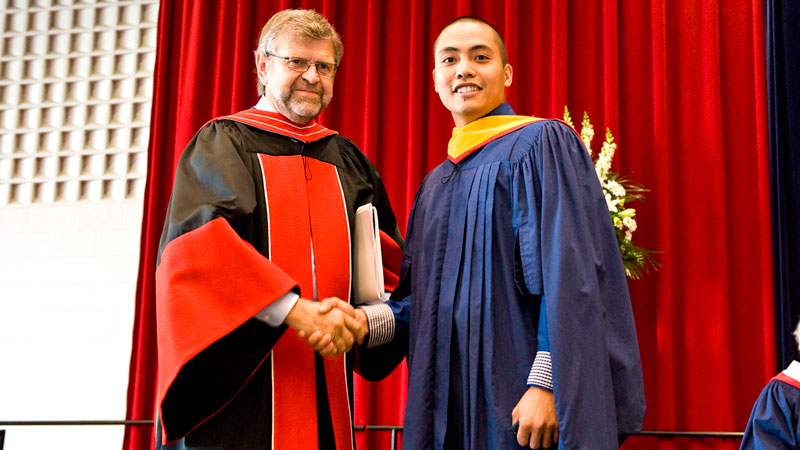 Val Andrei Fajardo has always been fond of math.

“To this day, I still remember math class in Grade 2 where I would finish my math assignments early and ask the teacher if I could help mark,” he says. “I guess it is natural since my parents are both Certified General Accountants.”

Fajardo was presented with the Governor General’s Gold Medal at a Convocation ceremony today, recognition of achieving the highest academic standing at the graduate level. Fajardo, who earned his MSc in Mathematics and Statistics, is one of 388 graduate students receiving their degrees during this week’s ceremonies. He is currently at the University of Waterloo pursuing a PhD in Statistics.

“Examples are earthquakes, hurricanes, floods and forest fires which cause huge damage for humans and the economy,” he explains. “The research work involved modeling extreme events, based on the real world data, to estimate the losses and predict the risk of future extreme events. The results of this research provide methodologies which help to protect against future damage.”

Fajardo was born in the Philippines. He was three when his family came to Canada in 1990, staying briefly in Scarborough before settling in St. Catharines.

One of four children, he shares with his twin brother and older brother the first-name prefix of Val. He’s good humoured when asked about this family detail, particularly at Brock where his twin, Val Andrew, recently completed an MSc in Applied Health Sciences.

“I am Val Andrei, my twin is Val Andrew and my older brother’s name is Val Marklou. However, my sister was not named Valerie, but simply, Jacqueline from the greatest/famous Jackies of the world,” he says.

One of Fajardo’s proudest accomplishments at Brock was receiving an NSERC Alexander Graham Bell CGS scholarship for his master’s research. He is grateful for the guidance he received at Brock during his undergraduate and graduate research career.

“Dr. Mei Ling Huang was my supervisor, for whom I am indebted to for her tremendous amounts of guidance and support. I also must express my gratitude towards Dr. Wai Kong Yuen, Dr. Xiaojian Xu and Dr. Jan Vrbik for their hard work and dedication,” he says.

“Val Andrei is a careful and creative thinker with a long list of natural attributes — work ethic, confidence, respectfulness, calm demeanor, team player, dedication to success, and a positive attitude,” she says. “His academic achievements are an inspiration to me, my fellow colleagues and many students.”

Related links:
• Convocation schedule
• Link to a live stream of this week’s ceremonies