Grad shines bright inside and outside the classroom 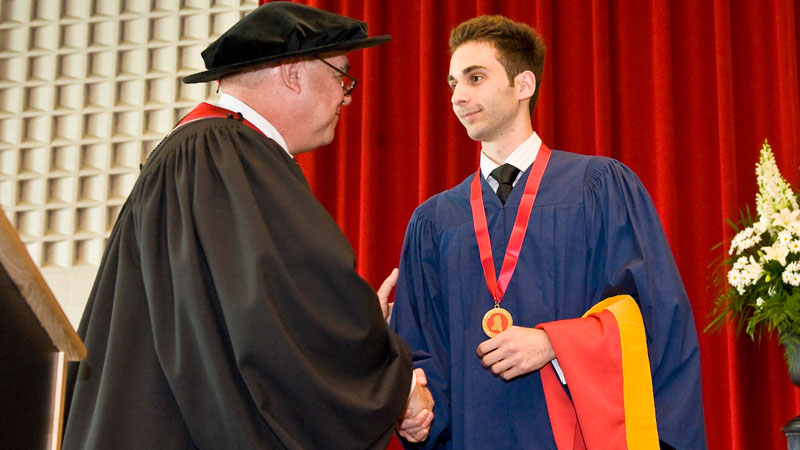 Jonathan Menchella, right, receives his Spirit of Brock medal from Rudi Kroeker, chair of the Board of Trustees, at Convocation today.

Jonathan Menchella has some words of advice and encouragement for the next crop of students coming to the University — “get involved and give back to the community.”

Menchella received the Faculty of Applied Health Sciences undergraduate Board of Trustees Spirit of Brock Medal at today’s Convocation for the countless hours he has devoted to community outreach and volunteer initiatives in Niagara.

The lifelong St. Catharines resident acquired a passion for community service and volunteerism during his years at St. Francis Secondary School. And his enthusiasm has only flourished during his time at Brock.

“I feel like it really gives you the university experience by getting involved in extracurricular and volunteer work, in addition to academic study,” he said.

The Community Health Sciences graduate has skillfully balanced his in-class performance with his community-based work.

Menchella’s been on the Dean’s Honours list for the past four years and is the recipient of the President’s Surgite Award for exemplary leadership and significant contributions to student life at Brock. The list of his community involvement is equally astonishing.

He’s volunteered in the emergency department at St. Catharines General Hospital as part of the University’s Med Plus program. He’s a peer-mentor to first-year Brock students and is involved with the local Big Brothers and Big Sisters In-School Mentoring program.

He’s also volunteered his time with the Canadian Cancer Society, Canadian Heart and Stroke Foundation, Family and Children’s Services, Canadian National Institute for the Blind and Kidney Foundation of Canada.

In 2009, he founded the Brock chapter of War Child Canada.

He got the idea to establish the chapter after reading an article by Dr. Samantha Nutt, a co-founder of War Child Canada who received an honorary degree from Brock in 2005. The charity helps war-affected children in parts of the world devastated by human conflict.

“I was really interested in the cause,” said Menchella. “So I went through all of the administrative work to get it started here at Brock, because it was one of the few universities which didn’t have a chapter.”

For his work with War Child, he was chosen by his campus peers as one of the top 100 student leaders in Canada through the Campus Perks website.

The Brock chapter, with more than 30 active students, has raised money to help build a school in Darfur. It has also offered relief and support for children in Haiti, Sri Lanka, Sierra Leone and the Congo. The chapter is also does outreach to local high school students.

This fall, Menchella will continue his academic endeavours as he takes the next step on his career path to becoming a family physician. He will begin graduate studies in physiology at the University of Toronto.

Looking back on his time at Brock, Menchella said, “It’s been a really great experience.”