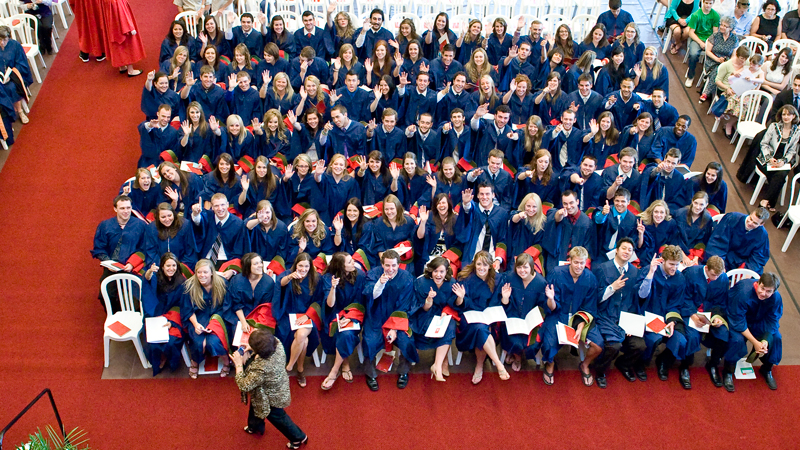 Here is a summary of Spring Convocation ceremonies. For archived video of the ceremonies, visit livestream.com/brockuniversity.

Tuesday, June 7 – Faculty of Humanities; Faculty of Mathematics and Science

More than 530 graduates received their degrees in the Ian D. Beddis gymnasium on Tuesday.

At the ceremony, Chancellor Ned Goodman spoke of how to “search for values in a competitive world.”

“I have learned that it is optimism that creates happiness. And in my business I know that I have never met a rich pessimist,” Goodman said. “So for a long time and a long time ago, I became an optimist and remain so today.”

President Jack Lightstone spoke about the “relationships between a university education and the world of work.”

“The capacity to analyze, to innovate and to be creative is most closely tied to the development of intellectual capacity that is the hallmark and the objective of a university education across any programs of study whether it’s a professional program or not,” said Lightstone. “You are critical thinkers. You are citizens,” she said. “You are crucial contributors to some of the most important conversations human beings can have about our relationship to the each other and our world. You are university graduates.”

Val Andrei Fajardo was presented with the Governor General’s Gold Medal, awarded to the student who achieves the highest academic standing at the graduate level.

At Wednesday’s morning ceremony for graduates from the Faculty of Education’s Hamilton campus, Kroeker handed out the Spirit of Brock Medal to undergraduate student Angela McGillion.

Professor Jennifer Rowsell, Canada Research Chair in Multiliteracies, delivered the morning Convocation address. She spoke about 21st century learning and told the crowd of graduating educators that it is an “exciting time to be a teacher.” “Children, adolescents, teenagers, swim in sea of online and offline texts. As part of their daily routines they view, they tap, they click and they slide screens,” said Rowsell. “They move through two- and three-dimensional worlds, they speak across networks of friends and family, and they are often insistently online.

“This communication competence is both a blessing and a curse. The trouble is that as educators we still need to teach our students how to decode and encode printed books, and read poems, and study social studies textbooks. We need to teach students how to write formal essays, and how to complete math equations. And teaching all of these things is no easy feat.”

A Dean’s Medal was awarded to Nicole Macri.

At the afternoon ceremony for graduates from the St. Catharines campus, Professor Michael Manley-Casimir, Graduate and Undergraduate Studies in Education, was presented with the Faculty Award for Excellence in Teaching. He also delivered the Convocation address.

At Thursday’s ceremony, more than 450 students received their degrees.

Goodman kicked off the ceremony with a series of questions he referred to as “the core of being.”

He asked the graduates: “What are you? What is your vision? What are you values? What is the purpose of your life?

“These are the questions that are at the centre of all our lives. And when we figure them out, we can get some focus and some content.” An honorary degree was presented to Claude Bouchard, professor and John W. Barton Senior Endowed Chair in Genetics and Nutrition in the Human Genomics Laboratory at the Pennington Biomedical Research Center in Baton Rouge, La. He also delivered the morning’s Convocation address.

“No one can deny that you are talented and capable of facing challenges successfully,” said Bouchard. “You have demonstrated clearly that you can set goals for yourself and devote time and energy everyday to ensure that these goals are met.”

He encouraged graduates “to be and remain a caring altruistic and kind citizen.”

Professor Tim O’Connell from Recreation and Leisure Studies was presented with the Faculty Award for Excellence in Teaching.

At Friday’s two Convocation ceremonies, more than 850 students were presented with their degrees.

In speaking about his involvement in the Northern Ireland peace process, de Chastelain spoke about the three factors that he felt were crucial to the success of the process – confidence, open-mindedness and respect.

“These are factors that I would commend to you seated here,” he said, “who are about to start your lives having graduated from this university.” Tanya Martini, Psychology, was presented with the Faculty Award for Excellence in Teaching at the morning ceremony.

At Friday’s afternoon ceremony, another group of graduates received their degrees.

Professor Stan Sadava from the Department of Psychology delivered the Convocation address.

Saturday’s ceremony, the last of the week, will proceed as follows: In his Convocation address, McCain spoke to the graduates about “qualities of leadership that the Maple Leaf organization embodies.”

“To sum it up, I have come to believe over these years that leadership is, first and foremost, an attitude. It is not an attribute of authority or of title or of rank. It is an attitude of behaviours that can be lived and acted upon every day of your life no matter what you do.”

Professor Mark Julien, Department of Organizational Behaviour, Human Resources, Entrepreneurship and Ethics, was presented with the 2011 Faculty Award for Excellence in Teaching.