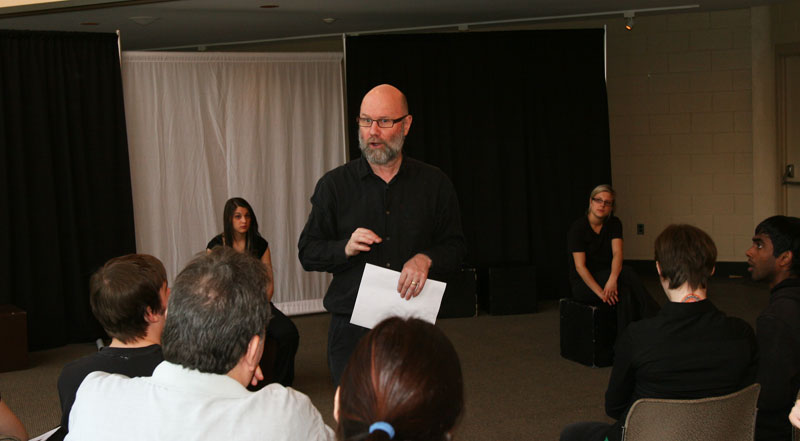 Joe Norris engages the audience during a recent Mirror Theatre performance at Brock. Joe Norris engages the audience during a recent Mirror Theatre performance at Brock.

Joe Norris has provoked discussions about issues such as substance abuse, bullying, harassment and human sexuality. And it’s all been through the power of drama.

The Dramatic Arts professor is the founder of Brock’s Mirror Theatre, a collective of about 18 students and staff who prompt group discussions through a method called playbuilding. By acting out scenarios, they inspire the discussion of social issues ranging from violence against women to workplace harassment. Joe Norris and his book, Playbuilding as Qualitative Research

Mirror Theatre’s most recent performance was “dis”Positions, a presentation about workplace violence for Brock’s Human Resources, Environment, Health and Safety.

Group members – about 15 of which are students – acted out workplace scenarios, stopping to engage the audience in discussion and revising their performance accordingly.

“We research stories and translate them into theatre,” Norris said. “We give our audiences the thesis and the antithesis and workshop them in finding their own synthesis.”

Mirror Theatre does about one performance per semester, which is as much as the non-profit can handle, Norris said. But its potential use is widespread.

Norris started thinking about playbuilding as a Nova Scotia high school teacher in the 1970s and 80s. He engaged students in collective playwriting, which meant several of them had a hand in writing it. By giving them a voice, he said, they learned more and were more engaged in the class.

His first university job was at the University of Lethbridge, where he held a student production, Snapshots of Playing Together, in 1991. He took the concept to the University of Alberta in 1992. Soon there were numerous requests for performances.

The group incorporated as Mirror Theatre in 1997. Its work included a series of performances for the Alberta Alcohol and Drug Abuse Commission, the Canadian Brewers’ Association (about underage drinking) and a series of videos for Safe and Caring Schools.

“Over the time I’ve been doing this, we’ve never lacked for topics,” Norris said.

He brought the Mirror Theatre concept with him to Brock in 2009. He has found group members and audiences to be enthusiastic and engaged.

There are five ways we communicate – numbers, words, images, gestures and sounds. But academia tends to only focus on the first two, Norris said. Mirror Theatre attempts to engage them all.

He hopes the book award gives others the freedom to engage in research that operates on all five cylinders.

“I want this to enable others who have wanted to do this to do it,” he said.

“This has been a collaborative adventure of hundreds of people. They all had a part in writing this book.”