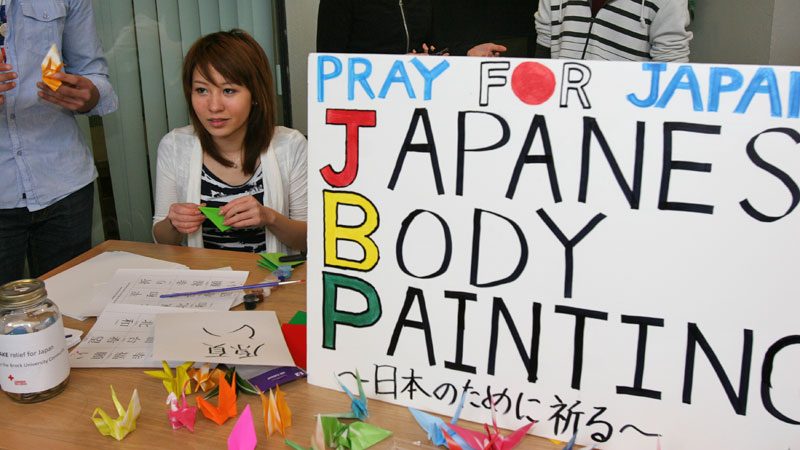 Vicky Shih makes a paper crane as part of a fundraising effort for Japan. Vicky Shih makes a paper crane as part of a fundraising effort for Japan.

There was origami and body painting in Market Hall today to raise money for earthquake relief in Japan.

A group of students – many of them Japanese – gave passersby a taste of home by sharing recipes and doing paper crane demonstrations. The event was part of Brock’s campaign raise money for the Canadian Red Cross and its relief efforts in Japan. • Watch a video of student Hirokazu Nakai, a native of Yokohama, Japan, demonstrating how to make a paper crane.

The island nation was devastated on March 11 when it suffered a 9.0 magnitude earthquake, which triggered a massive tsunami. The death toll is in the thousands.

Fifty cents from every stir-fry sold went to the cause.

Donations will be accepted at the International Services and Programs Abroad office at GLN-B 210 in the International Centre. You can also call 905-688-5550 x3163 or email isa@brocku.ca. Cheques are preferred and can be earmarked “Japan Earthquake/Asia-Pacific Tsunami” and sent through inter-office mail.

To donate online, visit redcross.ca and cite the donation as part of the Brock/Japan Red Cross fundraising group.