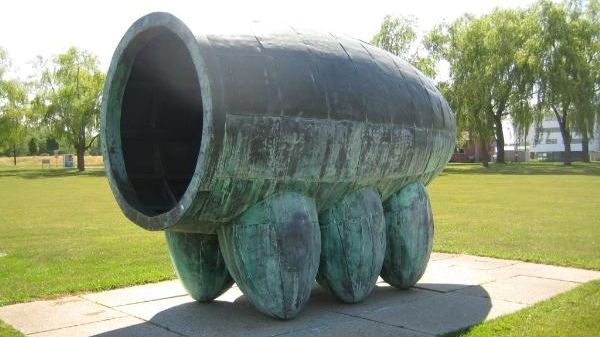 Coined by Brock employees and students as the Rhino, the Cannon, and most popular, the  Bullet, over the years the She Wolf sculpture has acted as a central meeting place for student lovers, friendly hangouts, and at times, drunken debauchery. It’s also been the source of heated controversy.

She Wolf arrived on Brock’s campus in 1992 as part of The Teutloff Collection. In 1988, Lutz Teutloff, director of a commercial art gallery in Germany and collector of works by international artists, along with then-president Terry White, developed a plan by which Brock would accept 12 works of art as a loan from Teutloff. The works would be carefully chosen by Teutloff – works that he felt were particularly “open” and accessible to students and other viewers in an educational context like a university.

Upon its arrival, She Wolf was met with controversy and outrage. Members of the Fine Arts Committee and other members of the Brock community were unhappy they were not consulted about the acquisition.

“The Fine Arts Committee was mandated to help Brock create and follow through with a vision for what the institution should collect – Canadian art,” said Lesley Bell (BA ’88, BA ’90), visual resources librarian at Brock University. “Which this sculpture and others immediately arriving at Brock were decidedly not.”

People were also upset at She Wolf’s appearance. “Without interpretation,” said Bell, “the appearance of the work gave it a sinister, cartoonish meaning.”

But once the controversy cooled and explanations about the work’s meaning circulated, the Brock community began to appreciate its campus artworks. “It seemed a new piece was arriving on a yearly basis,” said Bell. “The community came to anticipate a new arrival with curiosity. The university even produced a small brochure that invited people to take a walking tour of the sculpture collection.”

Facts about She Wolf:

To see what other Brock grads had to say about She Wolf, check out December 16th’s Facebook thread at facebook.com/brockalumni