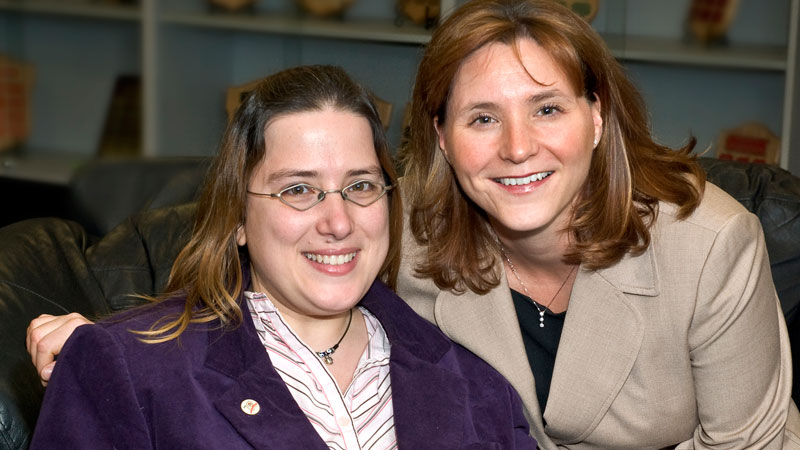 Marie Cutler can rest a little easier at night knowing that her alma mater is more accessible to anyone who enters its doors.

The alumna, who graduated in 2007 with a degree in Business Administration, co-chairs the Brock University Accessibility Advisory Committee (BUAAC) with Human Rights and Equity officer Marla Portfilio. It’s a committee with the daunting task of advising the university on modern accessibility standards.

The committee gives staff input in various areas, including web accessibility, the employment of people with disabilities and the university’s buildings. It does so under the Accessibility for Ontarians with Disabilities Act.

The early victories are visible. BUAAC has provided input into projects such as the Cairns Family Health and Bioscience Research Complex, the International Centre and the new Market Hall. Several of its members living with disabilities have spoken to numerous classes and shared their stories at conferences and training sessions to faculty and staff. With BUAAC’s input, there are accessible Sharps containers in some washrooms.

The committee has advised on the new brocku.ca website, and the university’s Emergency Notification System, and various other policies that impact the day-to-day lives of students.

Cutler sees accessibility as a moral responsibility as well as a legislative duty.

“Brock has a major role in the community, so I think it’s important that Brock is an example to show how accessibility can be done,” said Cutler, who works at St. John Ambulance in Niagara Falls.

For example, there are more door operators, which Cutler sees as a huge improvement. “It’s been a big help for people to not have to push open doors by themselves.”

She is also pleased with the increase in accessible washrooms.

“People don’t have to go from one building to another to use the washrooms anymore,” she said.

The committee, which meets nine times a year, was formally recognized during a celebration on Dec. 6, three days after the United Nations International Day of Persons with Disabilities. The celebration was held with Murray Knutilla, Provost and Vice-President, Academic.

The university is improving accessibility over time, but there is still a lot of work to be done, accessibility co-ordinator Margaret Sanderson said. BUAAC plays an important role.

“It’s important to have an accessibility committee in order to provide a voice to persons with disabilities in the removal of all barriers to their participation on campus.”