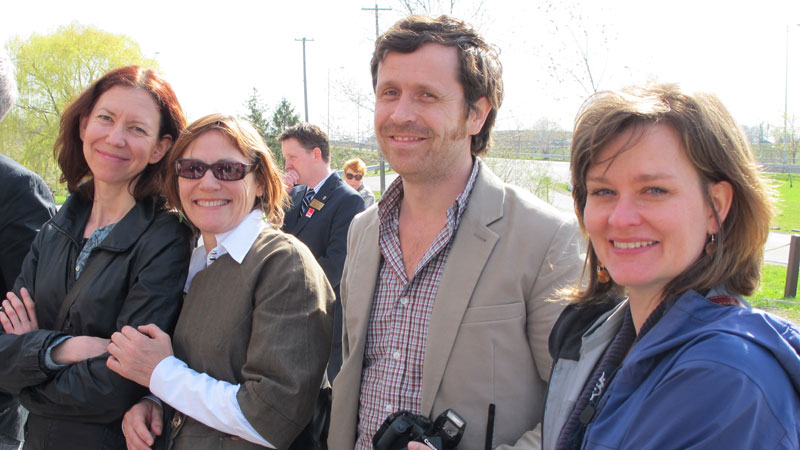 An associate professor of Dramatic Arts is being remembered today for her tenacity and passion for theatre.

Marlene Moser, a Brock professor since 2000, mentored students who went on to found local theatre companies. As one-time department chair, she fought for new academic positions and undergraduate programs in her department. She provided “leadership and love” to Dramatic Arts colleagues and students.

Moser died on Dec. 21 after a lengthy battle with cancer. She was 47.

Moser was tough and passionate about her work, said David Vivian, associate professor of Dramatic Arts.

“She challenged you to reach very deep down and investigate what was most honest and authentic about your intelligence and creative compassion,” he said.

She came to Brock in 2000 as an assistant professor. She was promoted to associate professor in 2005.

She held a BA, MA and PhD from the University of Toronto. Her research focused on Canadian drama and theatre, studying the construction of identities, especially as related to performance, narrative and spectatorship. She had a particular interest in Canadian playwrights Judith Thompson, Margaret Hollingsworth and Djanet Sears. She was also interested in theatre praxis (the merger of theory and practice). In 2004, she directed Oscar Wilde’s The Importance of Being Earnest at the Sean O’Sullivan Theatre.

She was important in the growth of the department, which is part of the Marilyn I. Walker School of Fine and Performing Arts.

“Her mentorship of five colleagues through tenure and promotion is but one facet of her legacy to the future of research, pedagogy and community,” said a statement posted to the Dramatic Arts website today.

David Fancy, current Dramatic Arts chair, recalls meeting Moser at a Canadian Association for Theatre Research conference. She immediately struck him as “a strong, witty and incisive person as well as an able leader and scholar.”

When he last saw her, she was quite ill, he said, but “she still spoke in energetic terms about the needs of the department, and of our collective vision as a location of research, creative and teaching excellence.

“We will miss her terribly.”

Deanna Jones is one of nine Brock graduates who founded the St. Catharines theatre company Suitcase in Point. Moser has sat on the board since 2006.

“She’s always been there as a mentor and supporter and friend,” said Jones, who describes her former professor as “warm, funny and extremely smart.”

Derek Knight, director of the Marilyn I. Walker School of Fine and Performing Arts, said he is “deeply saddened” by the news.

“Marlene was an extraordinary colleague, friend and mentor who touched the lives of many in her capacities as teacher, scholar and artist,” he said. “For those of us who knew her personally, she will always be remembered by the dedication and passion for the discipline that she loved and gave so much to, as a champion of all our causes, and as a deeply devoted friend whose grace, wisdom and warmth will always be cherished.”

Moser fought a five-year battle with cancer, and was working to create new performance-related therapies for cancer survivors. She is survived by husband Philip Toms and her daughter Cecilia.

The department will host a memorial event in the new year, with details to come. Funeral details will be posted as they become available.