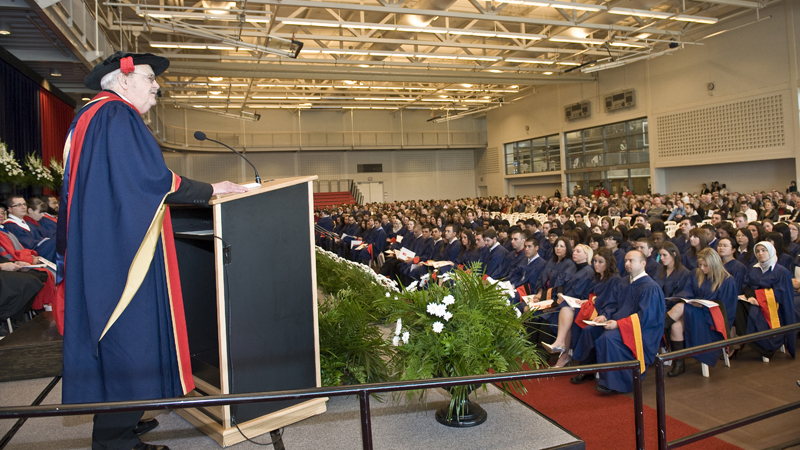 Anthony Hearn, who was presented with an honorary degree, addresses Convocation Anthony Hearn, who was presented with an honorary degree, addresses Convocation

“The speed, breadth and depth of change in our globalized and politically complicated world is greater than anything this generation has previously experienced,” Goodman said. “Believe it or not, this gives you an advantage — to be there with a fresh face and the capability to not be stuck with old and outmoded ideas and processes.

“You should accept the fact that you or I or almost anybody cannot properly predict the future. The truth is, no matter your intellect or knowledge, the future has a way of humbling us all.”

Rudi Kroeker, Chair of the Board of Trustees presented Board of Trustees Spirit of Brock Medals to undergraduate student Audra Sewell Maloney and graduate student Colin Perrier at the afternoon ceremony. The medals recognize students who exemplify the qualities that best embody the spirit of Maj.-Gen. Sir Isaac Brock — leadership, courage, innovation, inspiration and community involvement. In his convocation address, Hearn spoke about his career, and the incredible growth of the Internet and evolution of computer technology over the last 60 years.

He encouraged students to use their intellect to keep up with the speed of innovation.

“The message I want to leave you with is that this revolution is not yet over,” Hearn said. “Computer elements, processors, memory and so on, continue to grow in power, and shrink in size and price to the point that they are can be thought of as throw-away items.

“Just when we think that we have reached a limit, a new technology appears. The pace of change makes it almost impossible to predict what the next breakthrough will be.”

At the morning ceremony, Brent Faught, associate professor of epidemiology, Community Health Sciences, was presented with the Brock University Award for Distinguished Teaching. This was the second major teaching award he has received from Brock this year, having received the Faculty Award for Excellence in Teaching at Spring Convocation.

The morning also saw two Governor General’s Silver Medals, which are awarded to the students who achieve the highest academic standing at the undergraduate level, presented to Bailey Gresham and Norman Johnston.

At the 2 p.m. ceremony, Dorothy Griffiths, associate dean, Faculty of Social Sciences, and professor, Child and Youth Studies, was presented with the Brock University Award for Distinguished Research and Creative Activity. She also delivered the afternoon’s Convocation address.