Cairns family gift will have $10-million impact on research complex 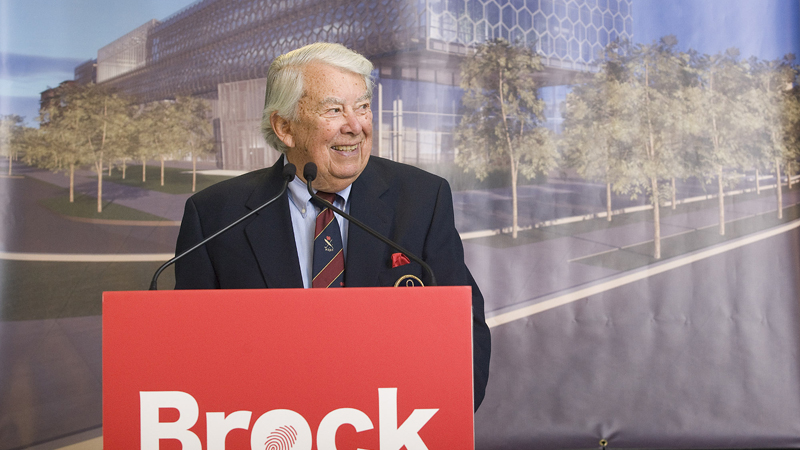 Roy Cairns speaks during the announcement of his donation to the new health and bioscience research complex.

It was standing room only on the fourth floor of the Plaza Building today as a transformational gift worth $10 million was announced for the Niagara Health and Bioscience Research Complex.

The Cairns family, led by patriarch Roy Cairns, announced its donation to what will now be known as the Cairns Family Health and Bioscience Complex. The philanthropy, given over several years, will cumulatively result in a $10 million gift to the university.

Roy Cairns made the announcement with his son Jeff, a Brock graduate and supporter. The elder Cairns is a long-time builder and friend of Brock, and one of the early supporters of its establishment.

“I have enjoyed every minute of helping Brock, and will continue to help Brock,” Cairns said during the announcement.

New small businesses in various fields will come to Niagara to be part of what the bioscience complex produces, he said.

“These businesses will change the face of the Niagara Region as we’ve previously known it.”

Cairns, a prolific Niagara philanthropist, is a founding partner in the St. Catharines law firm Chown Cairns and life member of the Law Society of Upper Canada. He is chairman and major shareholder of Charlesway Corporation Ltd. and has been, and continues to be, a director of several publicly-traded and closely-held private corporations.

He contributed to the Brock University Founding Fund, and was a member of the team that made the lead gift to build Taro Hall. The Roy Cairns Scholarship benefits a first-year student in the Oenology and Viticulture program.

Brock will do its part to uphold the legacy, President Jack Lightstone said.

“Make no mistake, generations of individuals and families in our community will have more opportunities, and will be collectively better off, because of the vision and the generosity of the Cairns family.”

Projected to be complete by 2012, the complex will be a 176,530-square-foot, $111.4-million facility that will provide support for four Canada Research Chairs and several award-winning researchers in biotechnology, green chemistry, plant pathology and health and wellness. The Cairns family poses in front of the sign for the newly renamed research complex. From left are Roy, John, Kitty and Jeff Cairns.