Accessibility at universities is ‘a moral obligation’: advocate 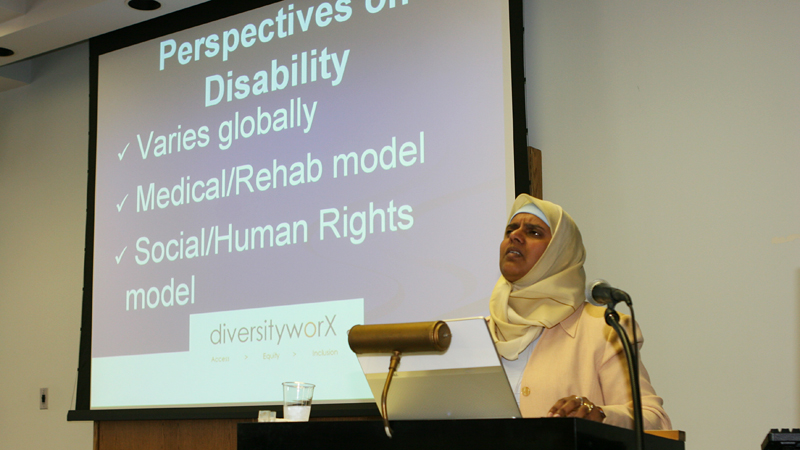 "Disability is one element of the identity that makes a person whole," says Rabia Kedhr, speaking in Brock's Sankey Chamber.

As a university student, Rabia Kedhr was accommodated, but she wasn’t always included. And that’s something higher education needs to change, she says.

In a May 14 speech in Brock’s Sankey Chamber, the well-known accessibility advocate recalled, as a blind student, having to study alone in a room in the library. There was equipment to accommodate her, she said, but she was excluded from the normal study tips, gossip and other student bonding.

“No one knew why Rabia went back to the secret room in the library,” she said. “While the rest of them went to study hall, I missed out on building those relationships. It excludes you from the norm.”

Kedhr’s talk was sponsored by the Office of Human Rights and Equity Services and the University Accessibility Co-ordinator. She recalled an Economics professor who told her that, because of her blindness, “My style won’t work for you.” In the end, she managed to demonstrate to the university that her poor grade wasn’t because of her ability to learn, but because she wasn’t accommodated.

She only knew about social events from her friends, she said. The events were mainly promoted through print advertisements, which weren’t accessible to her.

These are examples of struggles students with disabilities face every day. The province’s Accessibility for Ontarians with Disabilities Act is part of creating a more accessible world, she said.

“Equality in the context of disability means we have to create campus conditions that serve all of us,” she said. “We have to accept that people with disabilities and people without disabilities are, in fact, the same. We have to start from that common ground of belonging.”

Kedhr is a consultant with DiversityworX, specializing in accessibility and social inclusion. She has more than 15 years of personal and professional experience in accessibility, community development and outreach with persons with disabilities.

Future decisions on accessibility need to include people with disabilities, she said. And each organization needs “internal champions” who will fight for it.

“In doing so, you contribute to the ultimate quality of life of every student,” she said. “Education is the true foundation of peace and prosperity. It’s the bedrock of any civilized society. We have a moral obligation to make it accessible.”

One comment on “Accessibility at universities is ‘a moral obligation’: advocate”