‘Welcome to a dream come true’ 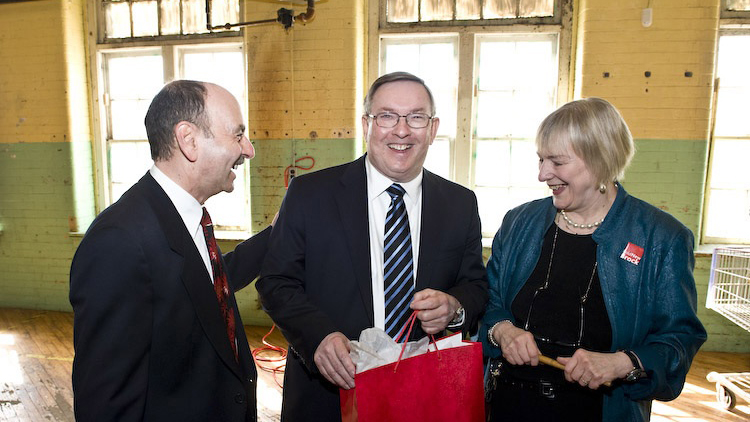 It’s a moment Brock and fine arts supporters have been waiting for: the announcement of provincial funding for the new downtown home of the Marilyn I. Walker School of Fine and Performing Arts.

St. Catharines MPP Jim Bradley announced Wednesday morning that the Ontario government will provide $26.2 million for the project. He made the announcement in front of the old Canada Hair Cloth textile factory in St. Catharines that will be the future home of the Walker campus.

Bradley announced the funding — provided over four years — to long applause from a large crowd.

“I know this will certainly act as a catalyst for the larger vision our leaders have for downtown revitalization,” he said. “Downtown St. Catharines will boast a diversity that will be the envy of many cities.”

Chancellor Ned Goodman described the announcement as “a tremendous transformative event for all of Niagara.”

The new Marilyn I. Walker School will provide state-of-the-art facilities for more than 500 full-time students and faculty, freeing up much needed space for other programs at Brock’s main campus.

The downtown fine arts campus is being built in partnership with the City of St. Catharines, which will build a civic Niagara Centre for the Arts on the other half of the downtown site. With the provincial funding now secured, Brock will fund-raise about $20 million to pay for its part of the Walker campus.

“This is an incredible day for Brock,” said President Jack Lightstone, “a day we have been working toward for a long time, with unceasing commitment and help from Jim Bradley. This is much more than wonderful news for a university that desperately needs more space. This investment in post-secondary education by the Government of Ontario will help change the lives of thousands of students whose knowledge and careers will be greatly enhanced by vastly improved educational facilities.”

“Welcome to a dream come true,” said Hale, who called about 30 arts students to stand with her during her speech.

“This is going to be an extraordinary place for all the creativity and imagination unfolding in the renaissance that is Niagara.” One comment on “‘Welcome to a dream come true’”