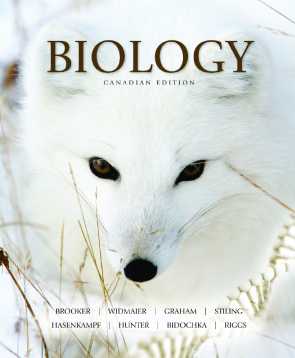 Thanks to the work of two Brock professors, first-year university students studying biology in Canada will no longer have to rely on U.S. textbooks. Professors Fiona Hunter and Mike Bidochka from the Department of Biological Sciences were instrumental in the development of a newly published “made-in-Canada” biology textbook along with two other professors from the University of Toronto, Scarborough.

“There are dozens of American introductory biology textbooks being used in universities all across Canada,” Hunter said. “This text is the first book of its kind to be published with a Canadian perspective in mind. It includes many examples of Canadians’ contributions to discoveries in biology, which we hope will motivate students to see themselves as ‘scientists in training’.”

“The Canadian edition of this popular book features more of the type of content requested by educators,” Bidochka said. “The book features interviews with Canadian scientists, topical discussion around Canadian research in the field and it also has an extensive interactive component.”

Professor Bidochka is a molecular biologist and registered microbiologist who looks at insect-pathogen interactions, assessing virulence factors. His lab focuses on obtaining knowledge on the basic biology and molecular genetics of insect pathogenic fungi so that they might be used more effectively for biocontrol.

Both professors have worked with the internationally renowned Edinburgh Malaria Research Group at the University of Edinburgh, Scotland. They have both conducted work in areas related to malaria transmission and malaria control.