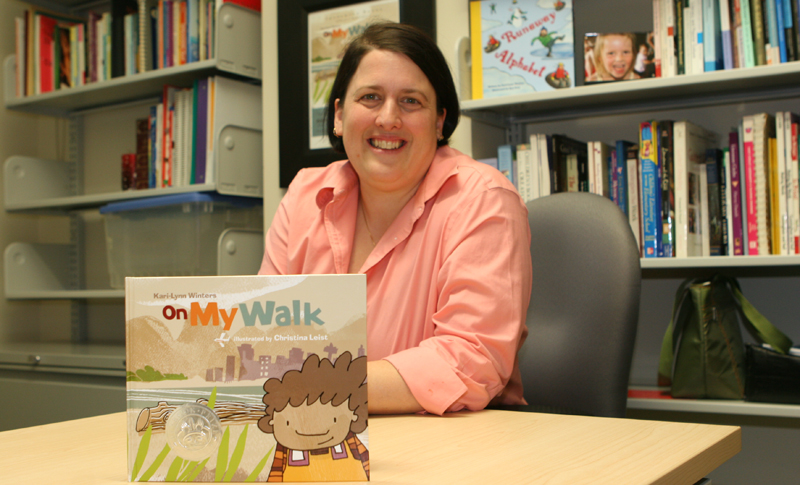 Kari-Lynn Winters' two-year-old daughter was an inspiration for On My Walk.

A book by a Brock professor has been nominated for the prestigious B.C. Book Prize.

Kari-Lynn Winters, assistant professor in the Faculty of Education, has been nominated in the Christie Harris Illustrated Book category for On My Walk. The story follows a mother and toddler on a walk through Vancouver. It is illustrated by Christina Leist and published by Tradewind Books.

This is Winters’ sixth book for young children, and the second to be nominated for the B.C. Book Prize. There are a lot of great Canadian picture books for children aged four to seven, Winters said. But there are few for children aged zero to five.

“When I read to my two-year daughter, McKenna,” Winters said, “she struggled to pay attention to the length of a regular picture book, so I wanted to write a whole story to her that was at her level.”

Writing for small children, she said, can be tougher than writing for adults. It requires taking an idea and scaling it back until it is at a children’s reading level.

“I know it’s ready when there’s not another word I can cut out of it,” she said.

Winters spent about two years working on On My Walk.

She now performs the book in classrooms using props and lots of action. She teaches drama in education at Brock.

The B.C. Book Prize will be awarded at an April 24 gala in Victoria, B.C.