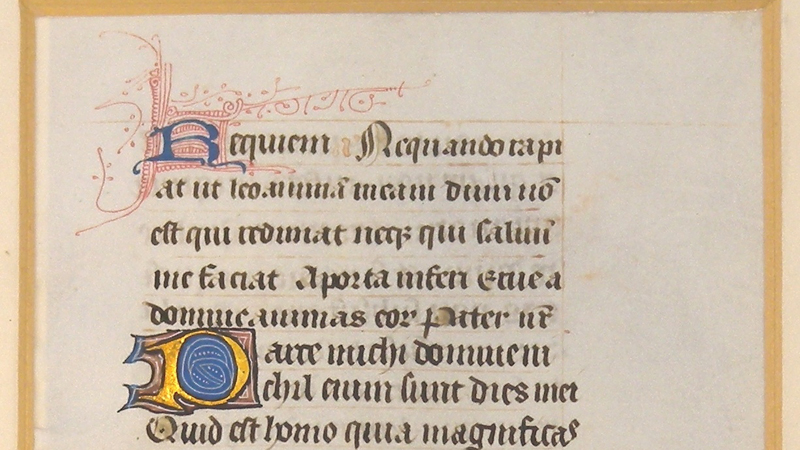 Brock will host a symposium March 19 showcasing medieval documents from the James A. Gibson Library’s Special Collections and Archives. A rediscovered 14th century psalm from a church reader

The event will be in the Sankey Chamber at Brock from 9:15 a.m. to 12:15 p.m. Everyone is welcome to attend the viewing of recently rediscovered and newly gifted documents from the middle ages. This is a rare opportunity to see documents not normally on display or put out for viewing, said David Sharron, head of Special Collections and Archives.

“We will also have a panel of medieval studies experts from various backgrounds who will explain the historical contexts of the artifacts on display,” he said.

Since March 2009, three documents dating to the middle ages have been rediscovered in Special Collections and Archives. And two more documents from the 15th and 16th centuries have recently been donated to the University. The rediscovered items include a 15th-century piece of sheet music, a 14th-century psalm from a church reader and the 13th-century Clopton Charter that was found in a drawer last year.

One of the newly donated items is a letter of King James VI of Scotland from 1579 that bears not only remains of the privy seal of Scotland but also the king’s signature. James VI later became King James I of England after the death of Queen Elizabeth I. Niagara Falls native Jonathan Milner, who graduated with an honours BA in History from Brock last June, will also give a poster presentation detailing the follow-up investigation and research he was hired to do on the 13th-century Clopton Charter.

The symposium is sponsored by the Humanities Research Institute, Centre for Medieval and Renaissance Studies, Department of History and James A. Gibson Library.

3 comments on “Symposium will showcase medieval documents at Brock”