Dissecting us versus them 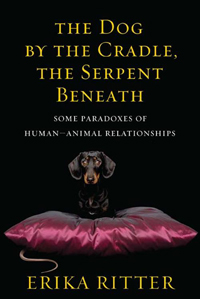 The complex relationship between animals and humans will be the subject of a March 22 talk by acclaimed writer and broadcaster Erika Ritter. Ritter will visit Brock to discuss her latest book, The Dog By the Cradle, The Serpent Beneath: Some Paradoxes of Human-Animal Relationships. The title refers to the story of a devoted greyhound executed by his master for apparently attacking the man’s sleeping child. Only after he’s killed the dog does he find the dead body of a serpent beneath the infant’s overturned cradle.

The book describes humanity’s love/hate relationship with animals, and how our treatment of them veers between empathy and cruelty. It was shortlisted for the Writers Trust Non-Fiction book prize in 2009.

Ritter’s Brock appearance is sponsored by the Departments of Sociology and Political Science and the Social Justice and Equity Studies MA program.

The book highlights striking contradictions, such as the fact that while we as a society spend millions of dollars on certain animals who we define as pets, we inflict hideous suffering on other animals who we define as food, said John Sorensen, Brock Sociology chair and author of the recently released book Ape. It also touches on the portrayal of animals in literature, views of animal activists, the inadequacies of Canada’s anti-cruelty laws and controversial breed-specific bans on dogs.

“Critical Animal Studies is a new and rapidly growing academic field and Brock University is at the forefront of this field,” he said. “Anyone who’s interested in learning a bit more about some of these issues will find Erika Ritter’s talk very informative.”

Ritter is a novelist, playwright, essayist and radio broadcaster. Her work includes the Chalmers-Award-winning play Automatic Pilot, the novel The Hidden Life of Humans and the essay collections Urban Sprawl, Ritter in Residence and The Great Big Book of Guys: Alphabetical Encounters with Men.

The event is from 2 to 5 p.m. in the Sankey Chamber. Everyone is welcome.

Quick link:
• Erika Ritter
• chapters.indigo.ca — The Dog By the Cradle, The Serpent Beneath