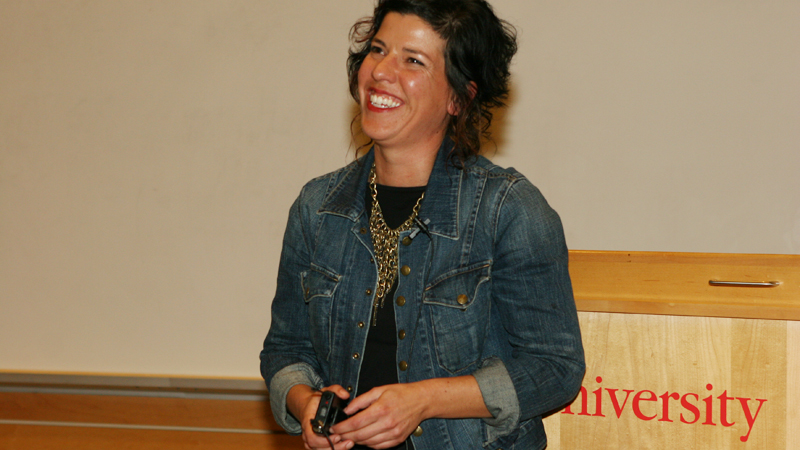 That was the message delivered by Toronto filmmaker Sara Roque last week as she gave the plenary presentation at the Niagara Social Justice Forum at Brock.

With her documentary Six Miles Deep, Roque told a 42-minute story about the clan mothers of Six Nations taking a deciding role in the demonstration at Caledonia. In 2006, Six Nations members stopped a housing development on land subject to a federal land claim. The claim has not been resolved.

Roque’s film depicts the clan mothers — a traditional source of power in the Haudenosaunee nation — leading a cultural awakening.

“I really found the women in the film inspiring,” said Roque, who is Metis and Aboriginal Arts Officer with the Ontario Arts Council, in an interview last week. “They inspired me to be curious, and to continue the work that we need to do.”

Six Miles Deep, a point-of-view documentary, was presented for forum attendees on March 20. Roque said one reason she focused on the women was because “we live in an extremely patriarchal society, and when you look at society as a whole, Aboriginal woman are kind of invisible to mainstream society.”

About 200 people attended the fourth annual forum. Other workshops included:

“The organizers of this event were mindful to create an open and shared space for community groups and individuals to encounter one another without any interference in how they choose to do that,” said Janet Conway, one of the event’s lead organizers and a Canada Research Chair in Social Justice at the University.

There was a performance of The Vagina Monologues that evening.

The Forum was sponsored by the Office of the Dean of Social Sciences, the departments of Social Justice and Equity Studies, Child and Youth Studies, Sociology and Women’s Studies, and OPIRG Brock.