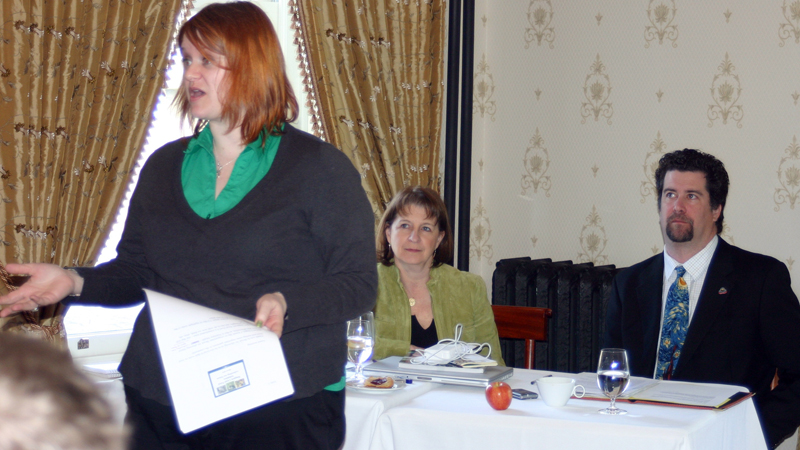 Terri Donia, left, from the Niagara Region speaks about the policy brief, while fellow panelists Lynn Ogryzlo and David Alexander look on. Regional and municipal politicians joined Niagara residents March 18 for a Brock-led discussion on local food initiatives, the challenges faced in the local food industry, and the vast potential to bring people and regional food together.

The centrepiece of discussion was the third policy brief released by the Niagara Community Observatory (NCO), a Brock research institute that gathers and disseminates research on issues that impact Niagara.

The third brief, authored by Sophia Papastavrou and Fran Chandler, is titled “Niagara Food: It’s Nutritious, Delicious and Available But We’re Not Buying It… Why Not?” David Siegel, Political Science professor and director of the NCO, said while there is usually some criticism against the local food movement, based on greenhouse gas emissions, the benefits and successes could outweigh the concerns.

“This could provide a great opportunity for producers and those who are preparing these goods,” he said.

David Alexander, a Welland city councillor who teaches rural geography and tourism at Brock, presented food for thought as one of three panelists during the presentation at Thorold’s Keefer Mansion. Alexander challenged those in attendance to “play with their food” by thinking outside today’s established norms and food-buying behaviours and patterns. He challenged government agencies to do the same, noting that Canada is currently the only G20 country without a national food policy.

Alexander and fellow panelist Lynn Ogryzlo, author and self-described culinary activist, noted the importance of linking education of children and youth with the local food movement. Ogryzlo asked the crowd what item would be considered to be Niagara’s culinary icon. The grape and the peach were the offered answers, but Ogryzlo shook her head. “The donut,” she said.

On the one hand, Niagara has an alarmingly high rate of childhood obesity, she said. On the other hand, seasonally available, nutritious options are available from thousands of local farms and producers. The disconnect needs to be addressed, she said.

Ogryzlo pointed out the economic impact of buying local as well. According to research from the Niagara Culinary Trail group, if residents spent just $10 per week of the grocery money they already spend on locally produced goods, they would inject $253 million into the local economy every year.

Terri Donia, panelist and a project manager with the Niagara Region, made similar points in her presentation. The agricultural potential of Niagara is 600 per cent higher than other places in Ontario, she said. Its assets include:

“It doesn’t have to take a lot of infrastructure for some of the initiatives,” Donia said. One online service, she said, allows consumers to shop for produce over the Internet and have it ready for pickup weekly at a nearby location.

In his concluding remarks, Siegel said the Niagara Community Observatory is looking for its next policy brief topic, and welcomes any input on potential areas of research. Previous topics have included attracting and retaining youth, and seniors.

Quick links:
• Niagara Food: It’s Nutritious, Delicious and Available But We’re Not Buying It… Why Not?
• Niagara Community Observatory