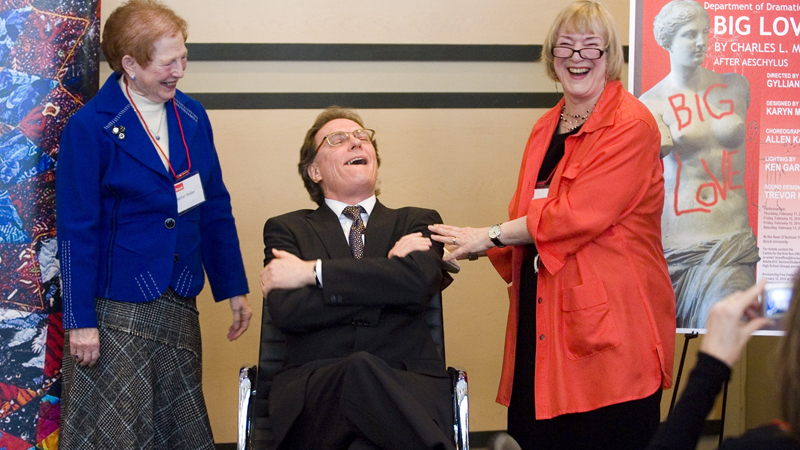 Derek Knight, centre, is presented with a chair by Marilyn I. Walker, left, and Rosemary Hale.

Brock has announced the creation and first recipient of the Marilyn I. Walker Chair in Creativity, Imagination and Innovation.

“Today we are announcing the first privately endowed Chair in the history of Brock,” said President Jack Lightstone. “This Chair represents a major step in the development of our University because it helps us fulfill our blueprint for the future — which includes fostering research and creative activity, expanding graduate and professional programs, enhancing interdisciplinary studies and community engagement. Our goal is to establish endowed chairs in all six faculties at Brock.”

Renowned Canadian fibre artist Marilyn I. Walker made the Chair possible with a $15 million gift to the University’s School of Fine and Performing Arts in November 2008 — the largest donation the University has ever received. The gift was endowed in perpetuity to support the future improvement of the School and its programming. This Chair represents the first tangible outcome of this vision.

“This announcement is about advancing the arts at Brock and in Niagara,” said Rosemary Hale, Dean, Faculty of Humanities. “It is also about enhancing our capacity to play a key role in partnering with our surrounding communities to influence the cultural redevelopment of our region as we work to build a world-class arts facility for our students, faculty, staff and patrons.”

Funds associated with the Chair will be used to support programming and investments at the School to build up its and University’s reputation in the area of fine and performing arts.

Derek Knight has worked at Brock since 1985. He teaches courses in 20th century European and North American art history, contemporary art and theory, and contributes to the MA program in Studies in Comparative Literatures and Arts. In addition to his own production of photo-based, conceptual and site-specific art and participation in more than thirty group shows, Knight has developed a profile as an independent curator.