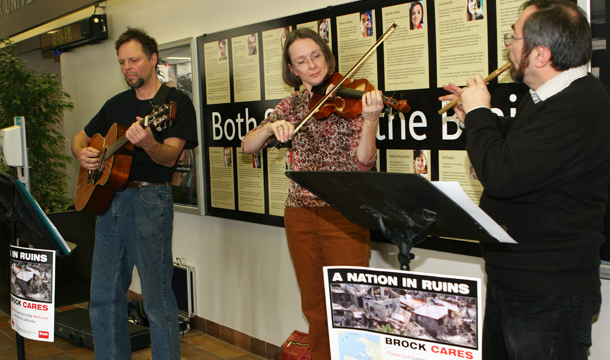 It’s only the first week of the campaign, and Brock people are already opening their hearts and wallets for the relief effort in Haiti.

“It’s been good. It’s been very good,” Kaethler said of the response. “But the need is so great.”

The portal is located at www.redcross.ca/brocku. About 20 coin boxes are located around campus. Other fundraising efforts include:

On Wednesday, professors Joffre Mercier, Fiona Hunter and Michael Bidochka – all from Biological Sciences – played Irish music in the Schmon Tower lobby at noon. The performance raised more than $400.

The Campus Store is also participating, offering customers the ability to add a donation to the price of their purchase. The Brock University Students’ Union is also holding a euchre tournament on Friday at 1 p.m. (Players can pre-register here.)