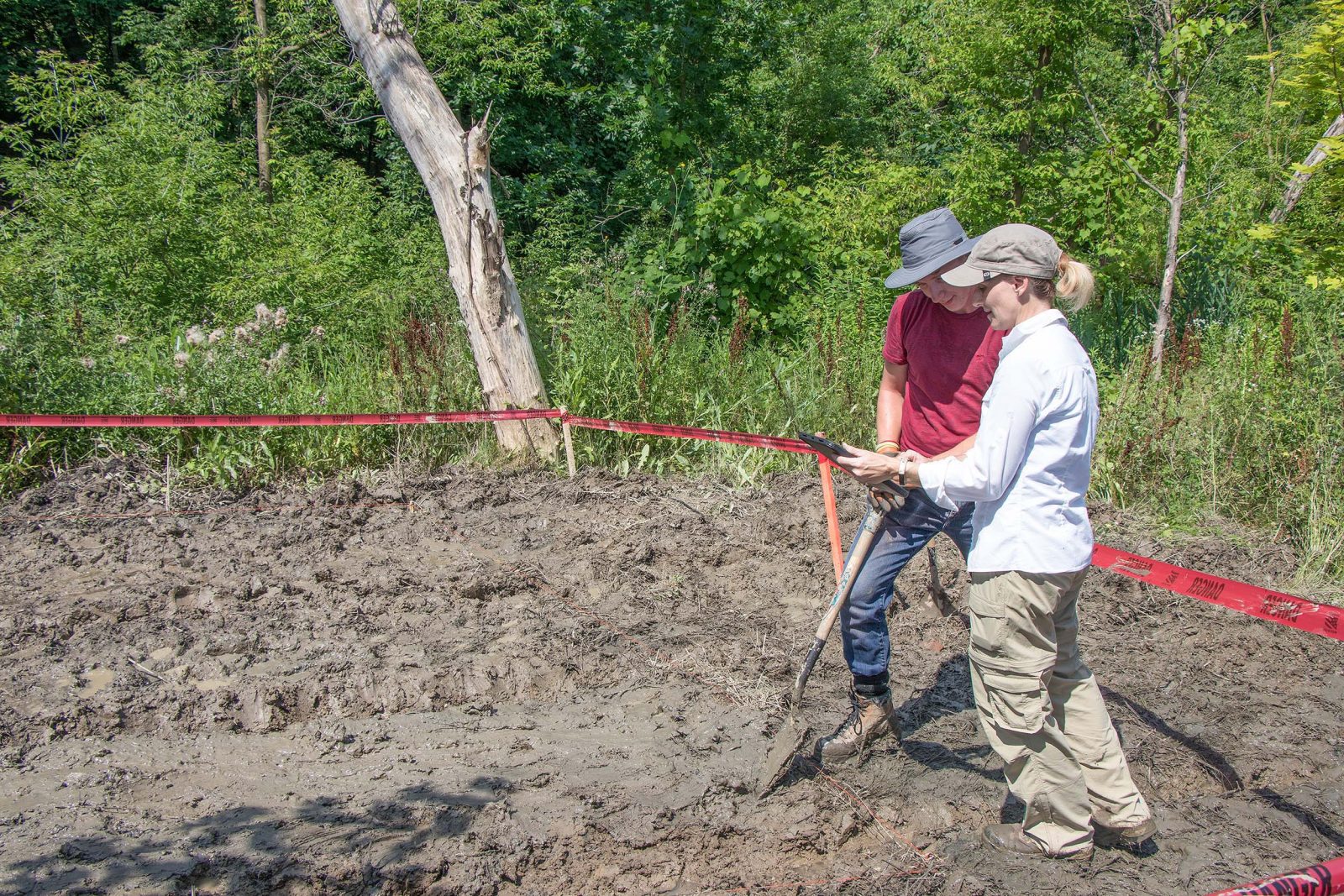 Instructor Kimberly Monk, Adjunct Professor with Brock’s Department of History, shows student Braeden Corr, left, a digital map of the Shickluna shipyard site, where archaeological excavation began July 18. The public is invited to tour the site and meet the archaeologists Aug. 17 and 18.

Excavation of the 19th century Shickluna Shipyard got underway Thursday, July 18, with Brock University students getting a taste of life on a dig site.

Archaeologist Kimberly Monk, Adjunct Professor with the Department of History, is leading an archaeological field school at the site in downtown St. Catharines for both Brock students and community members.

“We’ve had an exciting first week,” Monk said. “Students have had a week of training in archaeological methods, both in the classroom and the lab, where they’ve learned about the process of archaeology, about historical materials and why they’re important, and how to process and identify artifacts in the lab.” 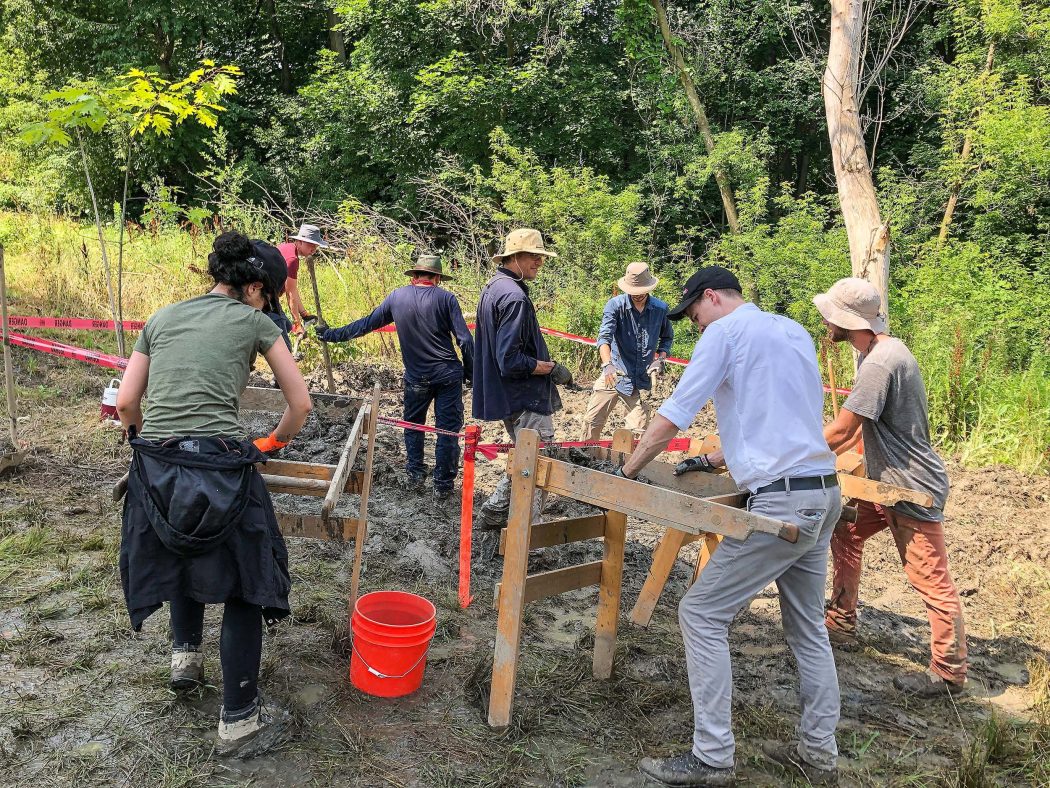 The wet, heavy clay conditions make for labour intensive work, as the site is excavated by students one shovelful at a time. The soil is manually worked through a screen to catch any small artifact fragments.

Students began excavation in an area believed to have been the site of houses used by the shipyard’s labourers.

“We think this big six-by-three-metre space is likely overlapping on some structural components of a small workers’ village that was up here on the slope and closely associated with the Shickluna Shipyard, likely for its own labourers and skilled workers,” said research assistant Michael Obie, who oversees the excavation crew.

The team will be looking for evidence of structures and the livelihoods of the inhabitants, as well as possible evidence of maritime culture.

“While it’s really mucky up there with clay and mud, that heightens the chances of us finding some interesting things that would otherwise be decomposed, like leather, basketry, textiles and wooden components of structures,” Obie said.

Waterlogged conditions can prevent or delay the decomposition of some organic materials that would otherwise break down quickly.

The excavation process is slow and muddy. Students excavate the area one thin layer of earth at a time. Each shovelful of soil is then manually worked through a screen to sieve out any possible artifact fragments. These are then bagged with an identification number that connects the artifact to a specific location, allowing the team to reconstruct the site and how it was used when they analyze the objects back in the lab.

“It’s pretty messy up there, which is a hassle for excavation, but we have a good crew,” Obie said.

The team is made up of 10 students taking HIST 3M60 Field School in Local Historical Archaeology as well as several community volunteers. 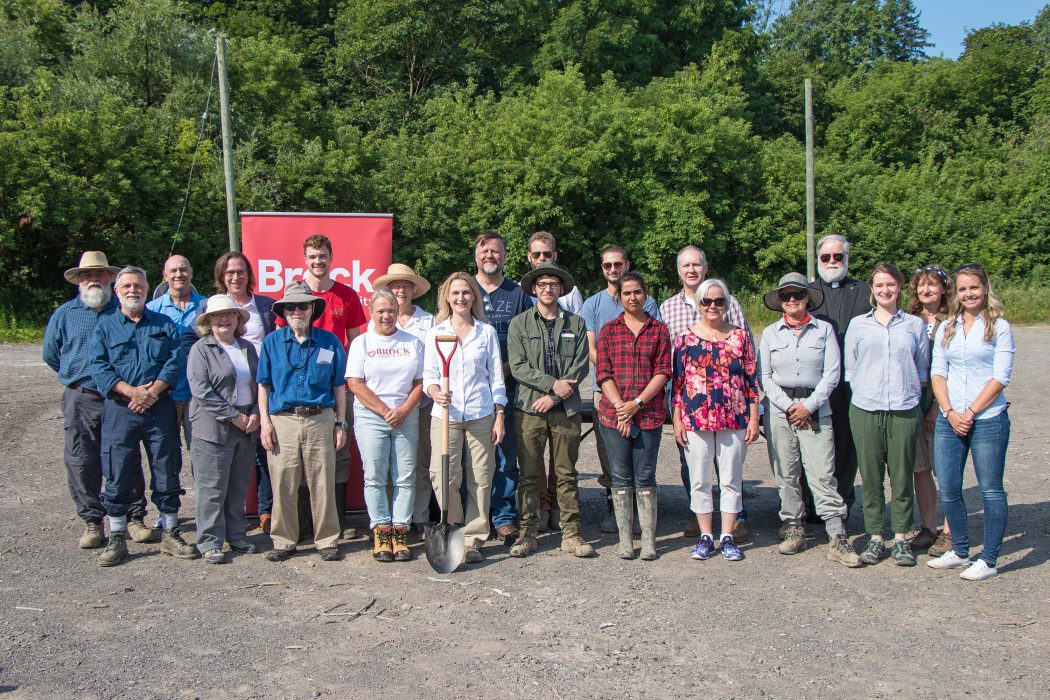 A ‘first shovel’ ceremony was held at the Shickluna shipyard site Thursday, July 25 with volunteers, students, local dignitaries and representatives from the Indigenous and Maltese communities present. The team began excavating operation area one, thought to be the site of a worker’s dwelling, on July 18.

“When I go to school, when I study, I’m always interested in what I’m learning and how it applies to what I want to do,” said student Colin Mackenzie, who is working on his undergraduate degree in History at Brock.

“I think archaeology is one of those opportunities to better yourself as a student and learn about the process. But in this particular case, it’s a way to give back to the community and help uncover a bit of our past.”

The public is encouraged to follow the excavations on Instagram andFacebook for regular updates and behind-the-scenes photos of the archaeological work. For safety reasons, people are advised to avoid the area while excavation is underway.

But that doesn’t mean they won’t have a chance to catch a glimpse of the project in action.

“We are eager to reach the community with our work,” Monk said. “We look forward to inviting the public on site to see first-hand the archaeological work we are doing.”

Brock staff, faculty and students will be able to visit the site Wednesday, Aug. 14, followed by public tours Saturday, Aug. 17 and Sunday, Aug. 18. Further details will be provided on the project’s social media channels.