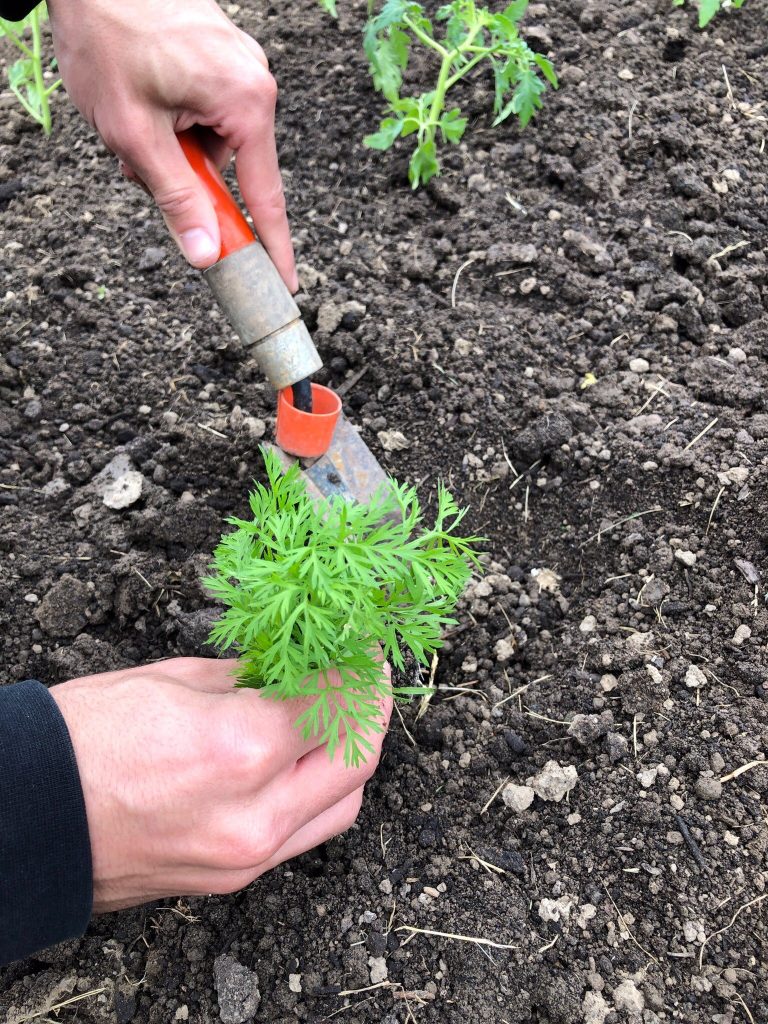 This particular photo is one that I personally like as it captures my first experiences with garden, as well as shows the garden itself in its beginning stages.

For my historical garden I am attempting to replicate one of the many so-called ‘Victory Gardens’ that were grown in the northern parts of the United States during the Second World War. The United States encouraged its citizens to plant these gardens as a way to deal with the restrictions placed upon the population as the war continued. More specifically, victory gardens were promoted with the purpose of offsetting the losses felt with the exportation of various fruits and vegetables to American soldiers and its allies fighting abroad.[1] Although these sorts of restrictions were common during war, it must be noted that American soldiers were considered as one of the most well-fed fighting forces during the war.[2] This was primarily due to two main reasons: (1) the United States was not fighting a war on its homefront, and (2) the country actually improved economically while the war occurred.[3] However, despite the lack of any real domestic threat to the American population, the government was still extremely successful in its campaign to promote victory gardens as there existed roughly twenty million gardens throughout the nation during certain points of the war.[4] This ultimately leads to one of the major questions for the following project; were victory gardens crucial to the war effort, or simply a byproduct of the many governmental plans to promote patriotism during the war?

It must be noted that prior to the following project, gardening was not something that I had done and wasn’t something that I felt I would enjoy. The decision to engage in this course came from a lack of options as I needed the credit to finish my degree in history and this was the only viable option for me during the summer. While these circumstances may be dull, I must confess that I have had one of the most enjoyable experiences preparing for the garden. The decision behind choosing to replicate a victory garden was due to a familiarity with the Second World War itself along with an understanding of American society during this period. The research behind the following project was motivated by questions centered around the impact of the Second World War on American society. Victory gardens are an area that I had not explored previously and provides a truly unique perspective that has helped bring about some interesting information that I had not considered when exploring the Second World War.

While the sources I am using for the following project are similar to the ones I’ve used for other major assignments I have had throughout my history degree (scholarly journals, articles, and books), I have also made an extra effort to explore more primary sources along with documentaries as these mediums are not only more engaging (in my opinion), but also more informative in some respects. The information that can be gained through an analysis of propaganda posters is far different than reading a scholarly article discussing the very same subject. This is primarily the reason why an image and youtube video were used to design the garden itself. The information provided by these two sources provided certain guidelines for the design, while also helping understanding the emotional connection between the garden and the war effort. 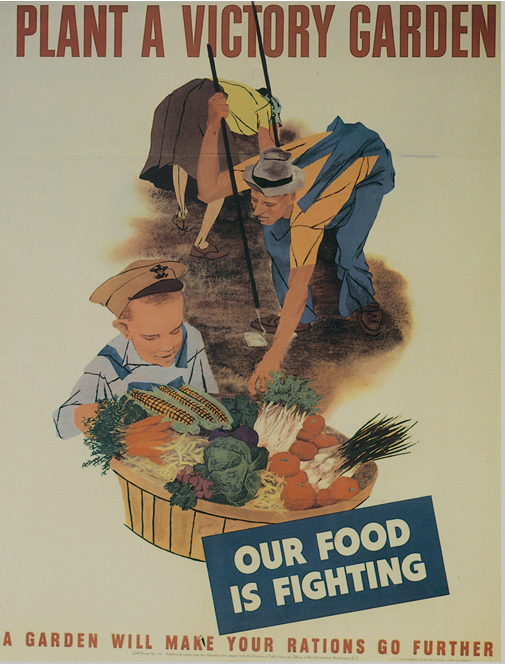 One of the biggest problems that I have encountered has been a lack of time available to tend to the garden. The purpose of the victory garden was to replicate the experience of an American citizen during the time of war. The importance of the victory gardens were heavily emphasized by the American government, thus, it is fair to assume that the average person would have cared greatly for their garden and tended to it on a daily basis. As Char Miller highlights, there existed a great deal of effort in the promotion of victory gardens as an important factor during the war.[5] Many groups and institutions created connections between these gardens and American notions of freedom to highlight its significance and increase its popularity among the population.[6] These connections were understandably extremely influential as evident by the sheer number of gardens that had existed. With this in mind, I must make more of an effort moving forward to tend to the garden as a way to simulate the emotional connection Americans felt towards these gardens. What was harvested was considered important and necessary to the war effort; this is a mentality that needs to be adopted further in order to replicate the war-time experience and maximize harvests.

The most important thing that I have learned so far has been in regards to the very nature of gardening itself. The gardening process was far more complicated than I had imagined as each individual plant required its own measurements and planting techniques. Tending to the garden has also been a huge learning experience as what is needed to maximize the harvest (using certain soils, plant foods, etc) must be kept in check in order to stay true to the period that has been chosen. Some shortcuts have been made, but this is an area that will continue to require further research in order to replicate the most realistic experience possible. The installation of fencing around the garden is something that is looked forward to as it will not only protect the plants from external threats, but also allow me to utilize further research to come up with new ways to improve the final product. Additionally, the next step in the research will also be to contextualize the American victory garden in comparison to that of those in Britain. This is an area of research that will expand the scope of discussion and hopefully bring about new ideas that will add to the overall question of the assignment; were victory gardens truly crucial to the United States war effort?