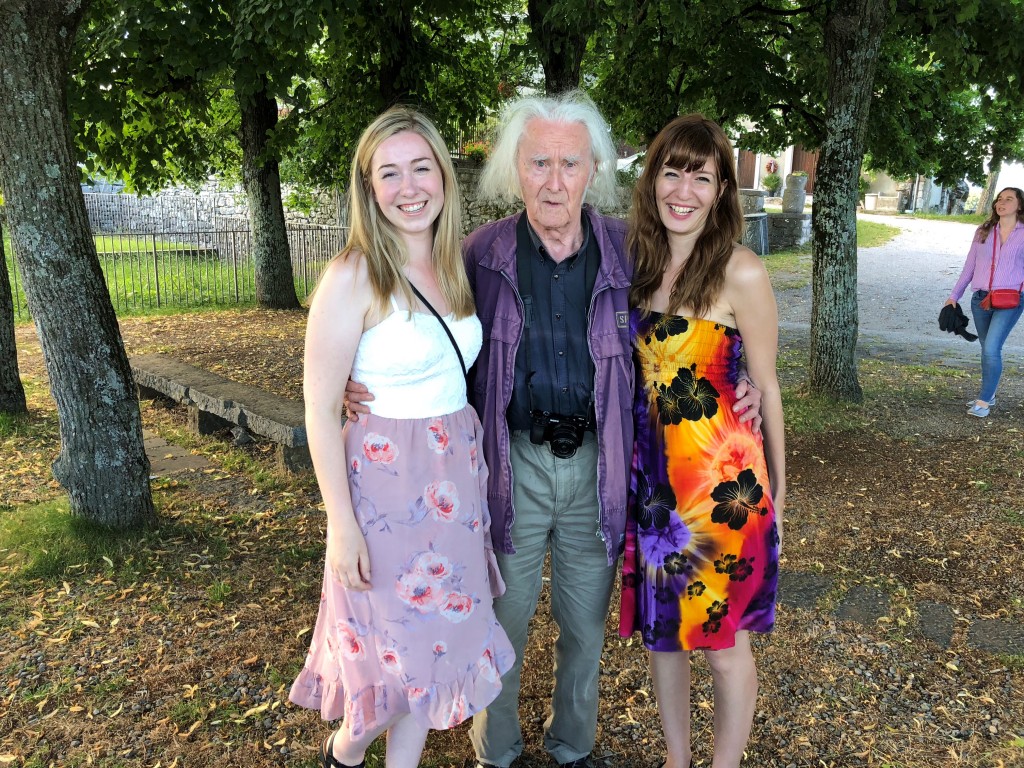 English MA students Jerika Sanderson (left) and Monica Sousa (right) spent a week studying James Joyce with scholars from around the world. A highlight of their experience was meeting the director of the Zurich James Joyce Foundation, Fritz Senn.

Brock MA students Monica Sousa and Jerika Sanderson have returned from a week of summer school— in Italy.

The two students were among this year’s participants in the annual Trieste Joyce School, held in the university town of Trieste in northeastern Italy.

The school brings together poets, authors and Joyce scholars from around the world each summer to participate in a week of seminars, lectures and cultural events.

Sousa and Sanderson attended daily lectures and seminars specific to Joyce texts each day of the week-long school.

The two learned about the opportunity while taking a fourth year English course on James Joyce’s Ulysses with Professor Tim Conley and were inspired to apply after hearing more about it from students who had attended in previous years.

“Other participants were all different ages, had different educational backgrounds, and were from different countries, so there was a huge range of perspectives on the topics we discussed,” says Sanderson, who, along with Sousa, participated in afternoon seminars on Ulysses at the school.

“I enjoyed hearing the perspectives of other students in the seminars I attended, but also the thoughts of Fritz Senn, a big name in Joyce studies and Director of the Zurich James Joyce Foundation,” says Sousa.

In addition to their academic activities, the students also participated in a variety of cultural activities, including poetry readings, walking tours of Trieste, attending an Italian opera, and a dinner at the Slovenian border.

Joyce spent nearly 11 years between 1904 and 1920 in self-imposed exile in Trieste, where he immersed himself in the daily social, cultural, and political life of the city and forged important literary friendships.

While there, Joyce finished Dubliners and wrote A Portrait of the Artist as a Young Man and Exiles. He also began Ulysses. The city was also a source of inspiration for Finnegans Wake.

“It’s a fantastic experience, and I’ve sent a few other Brock students to the school in the past,” says English Professor Tim Conley, who has taught at the school twice. “Students always come back very pleased and enriched.”

Although Sousa won’t be working on Joyce when she starts her PhD at York University in September, she values the experience of learning how to apply different theories to literature.

“The school offered me an opportunity to learn about new works and approaches that suit my interests and will come in handy to me as a graduate student,” says Sousa.