This fall, the Department of Dramatic Arts presented the play Gormenghast at the Marilyn I. Walker Theatre. The play, adapted from the UK cult classic fantasy trilogy by Mervyn Peake, is a tale of the dysfunctional House of Groan. Directed by Professor Mike Griffin and designed by Professor David Vivian, the production gave undergraduate drama students the opportunity to showcase their talents.

Helena Ciuciura played the role of Fuchsia in this bizarre and twisted tale, which ran November 11-19, 2016. We asked her to tell us what it was like to be a part of this production. 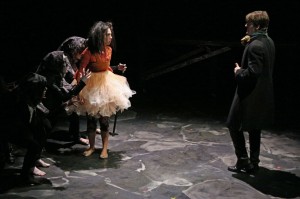 Helena Ciuciura played the role of Fuchsia in the Department of Dramatic Art's mainstage production of "Gormenghast" in November 2016. Photo courtesy David Vivian.

Gormenghast has been a theatrical experience that I will never forget. It has been, in both content and experience, such a fantastical world in which to work that I think most of us will miss dearly. It has been an incredible privilege to be part of not only a department mainstage production, but a show that was so epic in size, content, and emotion.

When we heard our Director and Professor Mike Griffin had selected the first semester mainstage, I distinctly remember him announcing the show by striking a Dracula type pose and whispering melodramatically “Gormenghast” with uncontainable excitement. 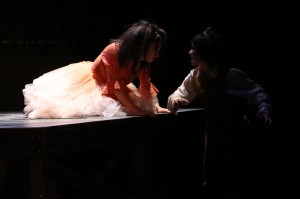 From start to finish I can confidently say it has never been boring being a part of this show!

Gormenghast is not traditional theatre by any means. As Dramatic Arts students we are exposed to a lot of realism and naturalism in the drama we see, so the production challenged what we thought was possible in theatre. It was an exploration of the unknown.

We worked for months immersed in the bizzarities of this fictional world, always trying to find a way to be bigger or weirder. We became so used to the absurdity of the show and so comfortable in the abnormalities, that weird became the norm.

I remember on opening night when people laughed or reacted to the insanity of the show we were taken aback; it had become so commonplace to us that we had forgotten it was abnormal. All of the strange elements in the Gormenghast world had become part of our world.

I played the character Fuchsia, the daughter of the Groan family who falls hard for Steerpike the antagonist, and the freedom from the castle that he offers to her. Fuchsia is a very emotional character who throws tantrums and professes love to the highest degree of emotion. This presented me with the challenge of finding authenticity behind the extreme emotions.

Through my personal emotional experiences in the Performance, Voice and Speech courses, I was able to find a human tenderness to the over­the­top, animalistic emotions of Fuchsia, and found it was easy to become quite attached to her. Working with such a talented cast made finding these emotions and connections come naturally as each actor could feed off of the wonderful group dynamic present.

Gormenghast has been a truly incredible experience and I am so grateful to have shared it with the cast, crew, department of Dramatic Arts and the St. Catherine’s community. 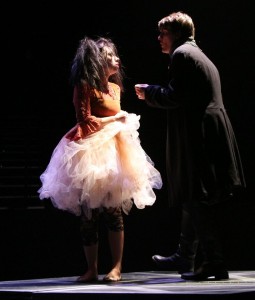