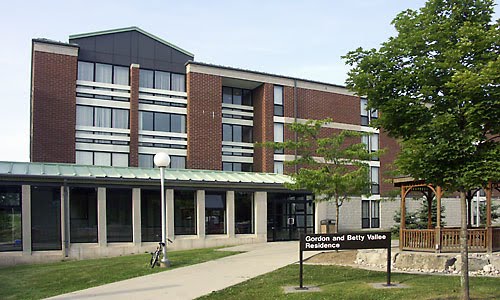 This residence is named after Gordon and Betty Vallee, long-time supporters of Brock. It opened in 1995 and was one of seven new residence facilities constructed at Brock between 1989 and 2003. It accommodates 251 students and has a common lounge and study rooms. A covered walkway connects Vallee Residence to the east end of DeCew. The residence was designed by Baker & Elmes Architects.

Fast fact: When the residence was first opened, it was called the New Residence or New Rez despite the fact that between 1989 and 2003 there were seven new residence facilities constructed at Brock. In 2000, the building was given its permanent, rightful name: the Gordon and Betty Vallee Residence. In 2009, Gordon Vallee died and a Rivers beech tree was planted near the south entrance of Vallee Residence in his memory.